Community Economies research and practice seeks to bring about more sustainable and equitable forms of development by cultivating and acting on new ways of thinking about economies and politics.

Building on J.K. Gibson-Graham’s feminist critique of political economy, this approach challenges three problematic aspects of how “the economy” is understood: seeing it as inevitably capitalist, assuming that it is a determining force rather than a site for politics and transformation, and separating economy from ecology. We understand economy as comprised of diverse practices and as intimately intertwined with planetary ecosystem processes. In a complexly determined world, change can be enacted in multiple ways. We are energized by the possibilities that this framing of economy affords.

Seeking to catalyze social transformation, we are developing a new language of the diverse economy, activating ethical economic subjects, and imagining and enacting collective actions that diversify the economy. For us, these actions comprise a “post-capitalist politics.” We do not place “the economy” at the center of social change since for us there is no privileged “center,” nor one determining dynamic of transformation. We believe in starting where we are, building other worlds with what we have at hand. Our particular focus is on identifying, gathering, and amplifying ethical economic practices that already exist—and that prefigure “the world we want to live in.”

The term “community economy” often refers to localized business activity. This is not the way that we use it. Our collective project challenges conventional definitions of both “community” and “economy,” generating a different approach to how we understand and engage with ways of living and working.

Community, for us, refers to the active, ongoing negotiation of interdependence with all life forms, human and nonhuman. The outcome of this negotiation cannot be specified in advance, or in any abstract generalized theory. Community is not a fixed identity nor a bounded locality, but is a never-ending process of being together, of struggling over the boundaries and substance of togetherness, and of coproducing this togetherness in complex relations of power. We emphasize process rather than product, struggle and deliberation rather than an image of a predefined collective identity or geographical locality. The key question for us around “community” is whether the dynamics of being together are obscured and made difficult to challenge and change, or whether they are made explicit and opened for collective negotiation and transformation. In other words, is the ongoing making of community a truly democratic process?

In conventional usage, economy often refers to a system of formal commodity production and monetary exchange. Our use of the term is much broader. The “eco” in economy comes from the Greek root oikos, meaning “home” or “habitat”—in other words, that which sustains life. The “nomy” comes from nomos, meaning management. We view economy as referring to all of the practices that allow us to survive and care for each other and the earth. Economy, understood this way, is not separate from ecology, but refers to the ongoing management—and therefore negotiation—of human and nonhuman ecological relations of sustenance. These practices don't all add up to a single system, and they cannot be reduced to one particular logic or rationality (individual utility maximization, for example); rather, they are diverse, complex, and contextually situated, animated by multiple motivations and relational dynamics. We prefer to talk, then, in terms of “economic practices” or “economies” rather than about “the economy” or “the economic system.”

Community economy names the ongoing process of negotiating our interdependence. It is the explicit, democratic co-creation of the diverse ways in which we collectively make our livings, receive our livings from others, and provide for others.

To help make these complex negotiations more clear, the Community Economies approach identifies a cluster of ethical concerns or “coordinates” around which community economies are being (and might be) built. They are:

Our first strategy uses a language of the diverse economy to expand the scope for economic action and legitimate economic politics across a broad front. Textual and visual forms of language play a crucial role in generating new ways of seeing and acting. Currently, the language of economy is dominated by an essentialist vision of capitalism: wage labor, commodity production for markets, and profit-seeking capitalist enterprise are seen as the real economy. Our anti-essentialist and non-deterministic language of economy destabilizes this singularly capitalist representation of the economy.

A vast and varied array of economic practices support lives in the world. We have used the Diverse Economy Iceberg as one way of representing how substantive economic practices are far more diverse than what is captured by mainstream economics. Economies involve a wide range of people, processes, sites, and relationships. What is usually referred to as “the economy” is just the tip of this diverse economy iceberg. 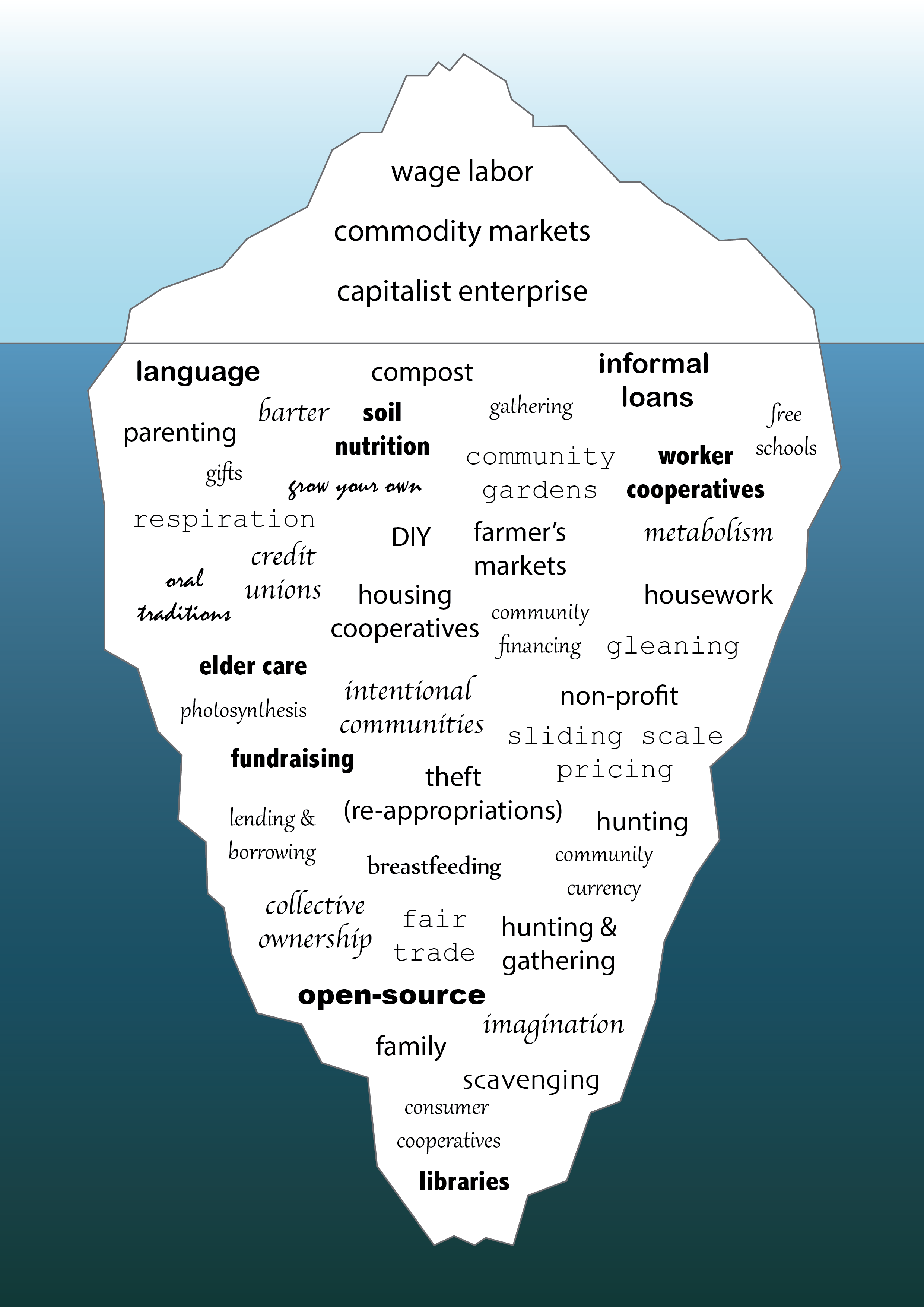 The language of the diverse economy allows us to identify actually-existing spaces of negotiation and to demonstrate why saying that we live in a “capitalist world” or a “capitalist system” is to negate the ways that other worlds are already all around us. Within a diverse “more than capitalist” economy, we can discern multiple pathways for building these other possible worlds. We approach these examples not with a judging stance, but with an open stance to the possibilities they contain.

One way we promote a language of economic diversity is through the use of five identifiers related to work, business, markets, property, and finance. Within each identifier, we include a range of economic practices including familiar or mainstream practices (from a Western perspective); those that have some of the characteristics of the mainstream but with a twist (e.g. in-kind labor payments; green capitalist firms); and those that fall well outside of what is usually considered “economic” (e.g., volunteer work, or gifting).

These identifiers serve two purposes.  First, they highlight the economic diversity that is already present in this world. They feature practices that by their very nature are imbued with ethical commitment (e.g., cooperatives, fair and direct trade); those that are neutral but could be imbued with an ethical commitment (e.g., household flows, sweat equity); and those that are immoral (e.g., slavery and feudalism). Second, drawing attention to this diversity helps identify economic practices that might serve as building blocks for community economies. Thus, the identifiers are prompts to help us see the possibilities that are all around and are triggers for conversation and discussion. We make no claims to “capture reality” or to be comprehensive or definitive.

Here it is worth noting that the identifiers are “works-in-progress.” Initially, we used the categories of labor, enterprise, and transactions; more recently, we have added property and finance. It is not a matter of getting the categorization right given how fraught with problems the process of categorization can be. We are currently exploring other ways of representing economic diversity that are not “boxed in” but recognize how these practices are messy, fragmented, contradictory, and unstable.

Our anti-essentialist approach encourages us to broaden the horizon of what constitutes economic politics. For us, transformation can occur over various temporal frames and geographic scales and can stem from actions both organized and disorganized (and even from non-human actions). Just as there are a diversity of economic practices, there are a diversity of political possibilities. In our own work, we have been inspired by the ways that social movements around feminism and sexual identity have remade society. In an astonishingly short period (two and a half generations or so), these movements have transformed the meaning of gendered and sexual identity and thereby transformed how lives are lived (and these movements continue to change lives). These social movements illustrate how thinking and acting differently in discreet locations can have global consequences. They also highlight the value of a form of politics that “connects the dots” between seemingly small and isolated actions and “scales them out” through adaptation, translation, and reinterpretation. These processes inform our second strategy of broadening the horizon of economic politics.

This understanding of change also means we have a distinctive take on more familiar forms of economic politics. When the economy is framed in terms of capitalism, and when capitalism is presented as spreading across the globe, it seems that it has to be matched by an equivalent anti-capitalist struggle organized globally. This diminishes the potential of the local as a site of economic politics. Framing the economy as comprising diverse practices, however, opens up multiple sites as places of economic struggle. It also destabilizes what we mean by global and local. What seems global is actually multiple locals; likewise, what seems local can be globally networked and connected.

Strategies for broadening economic politics build on the first strategy of activating a politics of language to help shed light on diverse and ethical economic practices. Here the aim is to help people recognize themselves as economic agents with the capacity to enact economic change through a politics of collective action. Some of the particular strategies that have been explored and elaborated by Community Economies researchers include:

These strategies and others can be found among the many publications, research projects, and resources presented on this site. Further details about the approach described above can be found in our 2017 collective report for the Next Systems Project. We welcome your ideas, inspirations, and engagements!