Community Economies is founded on the groundbreaking work of J.K. Gibson-Graham (the authorial voice of Katherine Gibson and the late Julie Graham). In publications such as The End of Capitalism (as we knew it): A Feminist Critique of Political Economy, A Postcapitalist Politics, and Take Back the Economy: An Ethical Guide for Transforming our Communities, J.K. Gibson-Graham opened up our understanding of 'the economy' as comprised of diverse economic activities--including those are the basis for more ethical economies.

In the 1990s, the Community Economies Collective (CEC) was formed by J.K. Gibson-Graham and a group of scholars committed to theorizing, representing, and enacting new visions of economy. Members of the collective were mostly based in academic contexts in Australia, Europe, New Zealand and the US. Their action-research engagements were, however, spread across the globe.

In 2015, members of the CEC launched the Diverse Economies and Livable Worlds book series with the University of Minnesota Press. 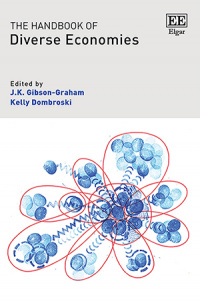